When A Lion Roars!

Kimba was a rescue a give-away.  She and her sister were handed into Patty’s Market in Brisbane, Fortitude Valley.  ‘The Valley’ as it is affectionately known by nearly all in Brisbane was and is still renowned for its nightclubs, bars, music festivals and Chinatown mall.  It was also unfortunately known for its population of stray and feral cats around the wharf area.

I will never know if Kimba and her sister were rescued from the wharf or surrendered to the markets as an unwanted litter.  I just knew that she was stunningly beautiful with the purest of white fur and pinkest skin.  No imperfections. Perfect. 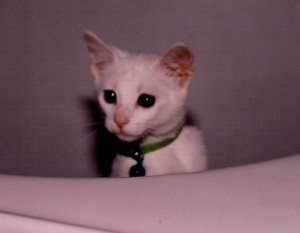 Whether it was a result from her initial start in life, or simply just her nature it turned out that Kimba only really liked her people (unlike Morticha who seemed to believe that everybody were her people).

Determining who Kimba considered her people was quite simple, as it would unfold quite quickly.  Kimba seemed to know the second she set her eyes upon you if she liked you.  Her decision to like or not, would last a life time and was not something she would readily revise.  She never displayed malevolence.  Kimba quite simply did not give you the time of day.  She would silently exit the room with an expression not much indifferent to a lioness after an antagonistic encounter with a hyena.  If she liked you, she would stay…offering up all kinds of affection. She was complex.  Kimba had her multi-faceted personality down to a fine art.

When it was decided you were her people, you would be lavished with love and affection. Wrapping her body around your legs, rolling on her back for belly rubs.  Worrying when she couldn’t find you, she would call out from room to room until you were safely located.  She would purr contently kneading your lap endlessly.  You were hers.   You were her world. 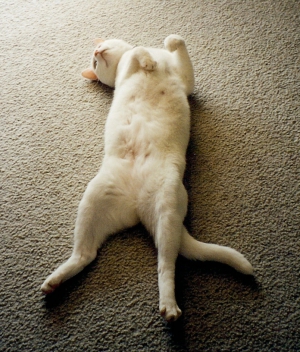 Kimba did however have one very wicked trait.  She did not like vets or catteries.  Kimba and Morticha stayed at a cattery for a few weeks while I went overseas on holidays.  The cattery was perfect, relaxing music played 24/7, huge ‘units’ with scratching poles, toys and lots of hammocks to laze away the days in.  Upon return to the cattery to collect the girls, I was told in no uncertain terms ‘You can get your own cats’.  Displayed on the door was ‘WATCH THE WHITE CAT’.

A visit to the vet for a dental appointment would end up with Kimba becoming banned from the clinic.  Apparently every time the staff walked past her pen she would lunge at the door, claws drawn, howling and spitting.  She did also bite through the vet’s heavy duty ¾ leather gloves, puncturing his hand.  Too frightened to have to deal with the gloves again, they decided it would be ‘much safer for Kimba’ to recover from her procedure in her carry cage.  Kimba was euphoric with excitement, purring and chirping once she realised she was going home.  I was abruptly told ‘Kimba did NOT act like this at all’ and asked to ‘Find a new vet for Kimba’.