There’s Been A Little Accident!

When I was a child I remember our family going on a holiday to Sydney and our lovely Silky Terrier ‘Penny’ had to stay at a kennel.  I remember this vividly because when we returned to collect her we were told Penny ‘Did not cope well at all’ and ‘Refused to eat’.

We were told she was so depressed they had no choice but to relocate Penny from the kennel and into the family home.  During the day she ran around the property with their children and own dogs and at night cuddled up inside the house (Something she was not actually accustomed to as my mother had a ‘no pets in the house’ policy).  Penny never again spent time inside kennel walls.

When Corey was around 18 months old, I went overseas for 4 weeks and asked my parents if they would mind ‘babysitting’ Corey.  I just could not bear to put my Corey into a kennel.  He was an indoor dog, certainly not accustomed to ‘slumming it’ in kennel conditions.  I could picture him confused, unhappy and believing I had abandoned him.

My parents were happy to assist they knew just how much I loved him.  When I dropped Corey off the morning of my flight, I handed over home-cooked frozen chicken dinners each in their very own little individual tubs, dry kibble, bedding, toys and a huge list of things Corey ‘likes/does not like’ and a list of ‘In case of Emergency’.  I literally cried all the way to the airport.

Upon my return 4 weeks later, Mum was standing at the door declaring ‘There’s been a little accident’.  That morning Mum had thrown a ball for Corey in the backyard and since then he had been limping.

I rushed him to the vet and was informed Corey had a very common problem, a ‘Luxating Patella’.  Quite simply, his kneecap would not stay in place.  I felt so sick for him, stressed!  He had surgery the very next day.  Pins were put in place to hold his kneecap. 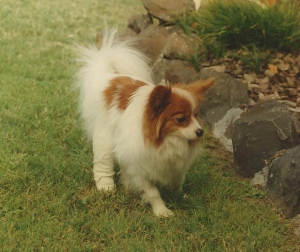 With his leg all bandaged up, a packet of painkillers, antibiotics, a list of ‘post care surgery’ and a expression on his face that said ‘But why mum, why?’  I was told ‘Keep Corey calm, do not let him jump or run around’.  Yeah, try telling that to an 18 month old puppy!  After a couple of weeks, I took Corey back to have the bandage and stitches removed, only to be told he had torn the stitches and the pin had come out.  No, not again!  I felt so sick for him, stressed!  The second round of surgery was a huge success and he never had problems again.

I made Corey a promise that day ‘I will never ever let anything else happen to you’.

If only I could have seen the freight train heading his way!