Take Me To My Happy Place!

Poor little Indy still suffers from motion sickness and as a result have decided to give him a break from the car for a couple of weeks to ‘reprogram’ before commencing a more controlled approach to motion ‘desensitisation’.

This decision was made just the other day when we were on route for another fun day out at Brighton.  Amber was eager, happily sitting in her car seat with bubbling anticipation of what was to come.  Indy however did not appear quite so keen.  To assist in reducing his history of motion sickness, Indy was positioned on my lap in the front passenger seat so he could see out front.  He was still appearing nauseous, making little whimper sounds and drooling. 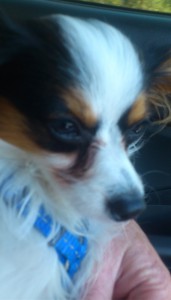 I Don’t Feel So Good

1 hour later….we made it all the way without incident!

I swung open the car door just in time as Indy projectile vomited onto the footpath.  Poor little boy, he held on the whole way.  On solid ground, Indy bounces back incredibly quickly.  Oh so many dogs are out and about today!  They were almost peeling out of their fur to get to them.

It was not the most idyllic day at Brighton, the bay breeze did have quite a chilly bite, however Amber was having none of this ‘let’s just stay nice and dry’ she was determined, we were going down to the sand.

For Indy, this was his first time to venture “off road” so to speak.  In his usual way he followed Amber’s lead teetering behind her down to the sand.  He was careful to avoid the pot holes of chilly water and tippy toed over the washed up shells.  He could hear dogs barking in the distance as they chased birds and kite riders.  Indy did not know where to look first, figuring it was best to sit for a minute or two to take in all of this exciting and a little bit scary surrounding. 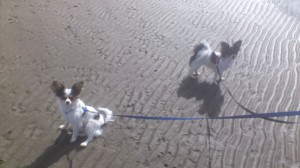 Taking It All In!

Amber immediately performed her ‘Sand Dance’ before promptly orchestrating some of her famous ‘Sand Art’.  Indy watched in amazement at the crazy and free spirited change in his big sister.  She was bouncing here then there, digging while getting all wet and dirty. 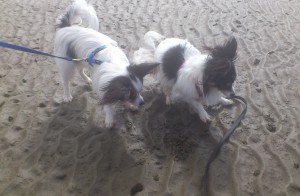 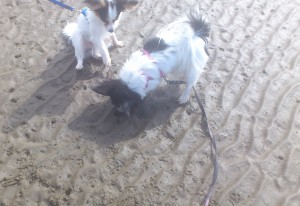 Suddenly in a freshly dug hole, Amber pulled out a small crab!  Dropping it from her mouth it scurried away, burrowing safe and sound back into the wet ground again.  Amber looked over at Indy with an expression that surely exclaimed ‘Did you see that!’   Indy was sold, I lovveeeee this game! 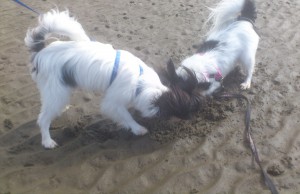 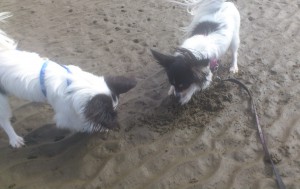 Once Amber and Indy were bored of performing the sand dance, making sand art and now feeling a little chilly, it was time to head home.  Clambering back into the car exhausted, Amber curled up asleep within minutes.  Indy fought to stay awake, appearing a little car sick at first and then he too finally succumbed for the need to sleep.

Looks like it is going to be a nice quite night tonight! 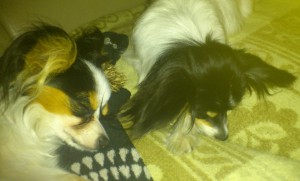