My Dogs and Chickens – How Is It Working Out?

It has been around 6 months now since our ladies Pearl, Violet and Grace joined the pack, and every day since they arrived, I have been working on introducing Amber and Indy.  I had hoped it would only take a few weeks for Amber & Indy to accept them or at the very least tolerate them.  But I must admit that it has taken quite a bit longer than I had predicted.

On the first day with all hens safe inside their coop I let Amber and Indy into the backyard.  I wanted to get an idea how they would react, and what I needed to do differently for future introductions.

I decided to let Amber out first, she always seems to be calmer than Indy when it comes to birds in the backyard.  She races at them and when they fly up onto the fence she simply walks away, job done.  Whilst Indy is a whole other story, he charges across the yard, through the garden bed and under shrubs in pursuit of a magpie.  When they land on the fence, he will jump up and down and bark consistently at them.  Not satisfied the job is done until the Magpie is gone.

When I took Amber out to the hens, she bounced over to take a closer look, than cautiously moving around the chicken run sniffing the ground walking parallel to the coop.  The hens were naturally fearful at first but to my surprise settled down fairly quickly.  I thought, that went better than expected!

Amber meeting the ladies….who are all hiding inside! 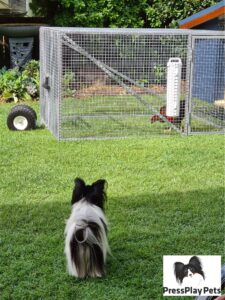 Amber calmly watching from a distance as one brave lady ventures out!

Now it was Indy’s turn, who was not even remotely interested in Amber’s calmly signals, he was chomping at the bit trying to get out into the yard.  Indy did just as I expected he would, he bolted flat chat at the coop, causing chaos as hens went scrambling over each other to get safety inside the nesting area. 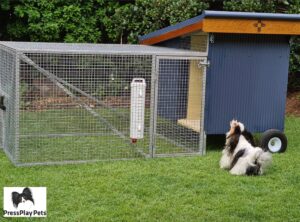 Finally, I thought my best and safest bet here would be using long leads with the sniff, sit and watch approach.  I knew I had to do my very best to be remain calm, not lose my patience and to ensure that they have a positive experience whenever they were near the hens.  This is going to be my go to training tool, to desensitise with repeated positive exposure.  Sounds easy right? 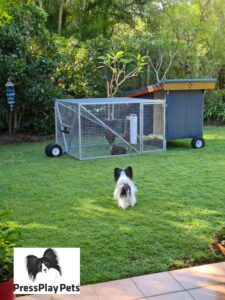 Indy waiting for the ladies to move so he can run at the coop again!

The hens had to remain in their house for 2 weeks to allow time for them to adjust to their new surroundings before letting them free-range.  Those first two weeks were spent getting Amber and Indy out on long leads and walking them around the yard, slowing getting closer and closer to the hen house.

The day finally arrived to let the ladies out of their house!  They bolted out and quickly started exploring the garden, turning up mulch, eating curl grubs and bugs.

I would take Amber and Indy for a short stroll around the block to allow them time to sniff, before returning home hopefully with two dogs now too tired to go nuts over 3 hens in the yard.  It did help, but oh wow we sure had some way to go yet! 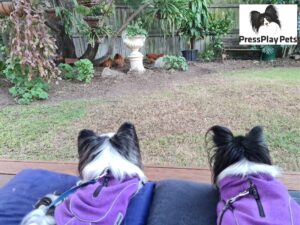 Every afternoon we would sit in the backyard, with Amber and Indy on long leads just watching the hens do their thing.  As they started to realise Amber & Indy were no threat (at least when in the house or on leads) they very quickly got into a routine. 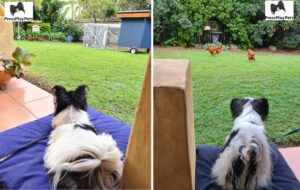 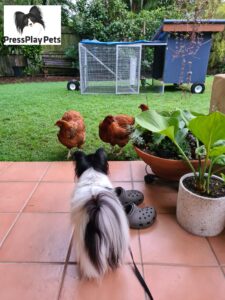 On lead but getting closer & closer

Then one day Pearl feeling a little too comfortable, decided to trot over next to Amber and Indy!  Both lunged at Pearl and the unthinkable happened; the latch that Indy’s lead was attached broke, and he bolting right for her!  I leapt to my feet screaming STOP!  Pearl jumped five feet in the air, landing directly in-front of Indy.  Standing her ground now with feathers up on end, she looked MASSIVE. Indy stopped in his tracks, presumably noticing her stance and size up close, she now appeared considerably larger than himself, Indy quickly back off and sheepishly return back to his sister Amber’s side!

I was saying okay okay….soooo no one was hurt, I think everyone has learnt a lesson here.  We are going to need some more time and maybe a stronger attachment for the lead! 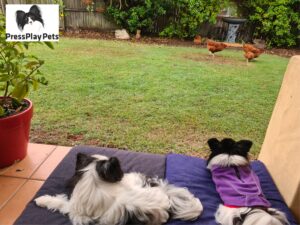 Four months later; Amber was beginning to show clear calming signals and finally it was time to try her lead free; free ranging with the hens. The first day I dropped the lead and let her sniff around dragging it behind her, just in case I had to jump in.  She began calmly sniffing around, slowing inching closer and closer.  The ladies looked up saw what was happening, for a split second looked like they were going to run. Then they began pecking at the ground and turning up the mulch. 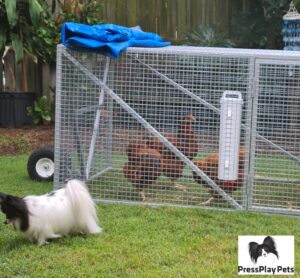 Free-ranging with the ladies and showing lots of calming signals!

It took another month before Indy too was finally trusted off lead and although he does forget his manners occasionally, he is doing remarkably well for a dog with such a strong chase drive. 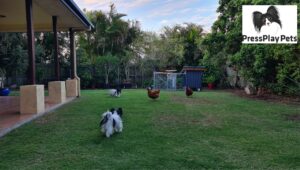 I never leave Amber and Indy unsupervised around the hens, ever. They do sometimes forget and try to chase their feathered sisters, which is ok, I am always there to keep everyone safe, and the hens have worked that out too! 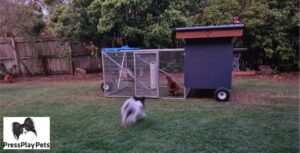 Blooper: Amber chases one of the ladies back into her coop