Corey was 9 when Buddy a Maltese x Shih Tzu moved in across the road at 8 weeks of age.  Buddy ended up being Corey’s life-long best friend.  From the beginning they always seemed to have this natural connection and kind way with each other.  I always felt they could feel each other had health issues, they were different from other dogs.  Corey had Addison’s disease and Buddy has Epilepsy.

Being quite young spirited for his 9 years, Corey just loved to be chased.  Corey and Buddy would play for hours.  Racing around and around his mum’s coffee table, Buddy always in hot pursuit of Corey’s beautiful wispy tail that was held out like a cavalry flag.  It fluttered just ever so temptingly in Buddy’s face.

The table has turned and Buddy is now that 9 year old being chased by a puppy.

Buddy is one of the sweetest and most gentle dogs I have ever come across.  I knew he would be the perfect first play date for little Amber.  Unfortunately, Buddy has been in solitary confinement in Corey’s old puppy pen for last few weeks, undergoing a little R&R as a result of an arthritic flare up whilst also on a diet to lose a few extra pounds.   We had to wait a couple of weeks to arrange their 1st play date.  What a sight, Amber looked like a Gazelle next to Buddy.  Who mind you, is doing very well on his weight loss program!  He loves the gourmet home-made dinners his mum is preparing.

Amber On A Lead So We Can Catch Her!

Amber, much like Corey loves to be chased.  She however, when she gets the speed up, does not hold her tail out high like a flag.  She more resembles a Hare with her tail tucked up tight between her legs, ears pointed erect as she bolts around the yard in figure eights at lightning speed.  Around and around she went with Buddy happily wagging his tail whilst meandering along in his own merry way.  Amber didn’t seem to be bothered that Buddy thought Ralph the Lorikeet was far more interesting than her and neither the fact that he spent a fair amount of his time next to my chair trying to convince me that tossing a few treats his way would be an amicable deal!  Sorry Bud, your Mum had already told me about the diet. 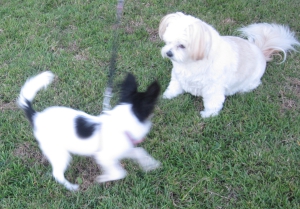 Amber was just happy to have a new fur-friend.   Buddy may not be as light footed as he once was, but he sure makes a perfect mentor for my little girl.