I Don’t Have A Handbag In Your Size!

Yelping, cowering and putting her tail between her legs Amber was acting like I had strapped razor wire around her neck.   I was so determined not to use the extender lead until she understood the correct way to walk on a lead.  No amount of coaxing with treats and bribery or rather positive reinforcement was working.  She would look at me like I was the most horrible person in the world and she just wanted to go back to her family.  This was all happening in the hall way, we had not even made the street yet!

I considered the fact that maybe I was taking this a little to quickly for Amber and thought that a ‘carry’ not a ‘walk’ around her new neighborhood may be the key, the scents and sounds of the hood.   I wanted her to discover that walkies were lots of fun and not torture!

Thanks to nearly every walker, runner and drive-by exclaiming loudly though gasping belly laughs ‘Wow that sure puts the meaning into taking your dog for a walk’, ‘Where’s your handbag Paris’, ‘Does she think she was born into the Hilton empire’.  Oh that’s funny….yep that’s the FIRST TIME I have heard that one!  The first week was getting kind of embarrassing.  I was beginning to feel deflated and thought that my little girl was never going to enjoy walks at all.

I was told that Amber’s litter were quite smart and to not let her con me.  Was I being coned?   I looked into Amber’s sweet little face as she looked up at me and blinked her big beautiful dark brown eyes.  Yep, I’m being coned alright.  I immediately booked her into obedience classes.

In the interim I have caved a little and allowed the extender lead until she gains some confidence and learns to love walkies.  To get her started, Amber’s first extender lead experience was at bay side suburb, Sandgate.  I carried her to the sand and placed her on the ground.  At first she tentatively sniffed around the sand and colossal amount of washed up shells and then slowly, very slowly started to paw the ground.  It was at that moment she began to walk, then trot and finally a gallop.  She was off...racing along the water edge until she reached the end of the lead. 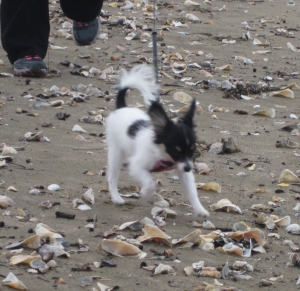 Amber On The Move!

Amber looked back at me and finally had an expression on her little face that was so happy.  She was wagging her tail.  A light bulb moment, walkies are fun! 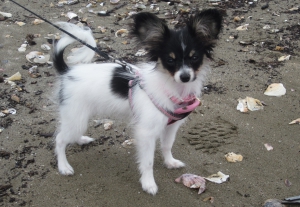 Amber comes in two speeds…STOP and RUN!    Hmmm maybe I should look into Agility?