Many months ago, Indy kept rubbing his face excessively, was squinting and the white of his right eye was very red. After a visit to our wonderful vet Dr Lucilla at Monier Vet Clinic, it is discovered Indy had developed a very tiny ulcer on his right eye. The plan was to treat the ulcer with medicated eye drops multiple times a day and strict instructions to stop Indy from rubbing his eye.

There were two issues with this plan:

After several attempts with medication going everywhere but in his eye, Dr Lucilla suggested we do a drive by every few hours and a vet tech or nurse would run out to the car park and pop the drops in. Success! 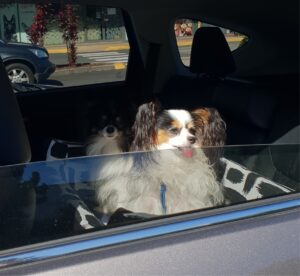 Waiting For My Eye Drops!

Now for the eye rubbing issue. We tried snow booties, although hilarious to see him wearing his very own “Kinky Boots”, he HATED them. 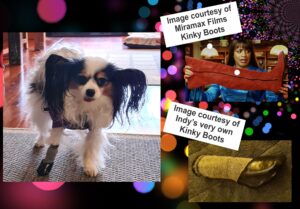 So this gave me an idea! What about something to cover his dew claws (which seemed to be doing the most damage) but not his pads. Leg Warmers! Our amazing friend Rhonda promptly knitted up some unique “leg warmers” to Indy’s measurement. A different “outfit” for each day of the week and they worked a treat! When wearing them, he completely avoided rubbing and his eye started to show improvement.

Imagine everyone’s amusement when Indy presented to his next check-up wearing “flash dance” leg warmers! Whatever it takes right?

Then disappointingly a few weeks later he started to show signs that the ulcer was re-occurring, even with his groovy leg warmers on. We were all so disheartened, we did everything, why was this happening again?

Indy was referred to Ophthalmologist, Dr Edith Hampson at Veterinary Specialist Services who advised that Indy had an Indolent Eye Ulcer (commonly known as “non-healing ulcer”) which are superficial defects of the cornea that fail to heal after 10-14 days. Yeah, didn’t we know it!

I was told the cause of these type of ulcers is usually unknown and are quite common. They can occur simply as a grain of sand, bubble of shampoo or another irritant getting into the eye.

The procedure was quick and involved:

How is a cotton bud debridement and burr keratotomy performed?

Anaesthetic eye drops administered, then a corneal debridement and grid keratotomy performed. The loose or abnormal looking epithelium (layers of cells) removed very gently, and the corneal surface treated with a diamond burr that very lightly scratches the surface. The purpose of roughening up the underlying stroma (connective tissue) is it allow the epithelium to attach and heal. Most dogs will have a contact lens placed on the eye to help it heal and to reduce discomfort. In Indy’s case they did not have any small enough for his eye size.

Unless the dog is excitable and will not sit still, the procedure is not usually performed under sedation. To my complete surprise Indy did not require sedation and was a perfect gentleman. If only he was like that at home!

Indy’s treatment plan going home for the next 2 weeks: 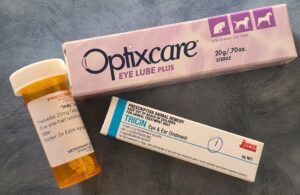 Dr Hampson delivered Indy to the car (due to Covid lockdown fur-parents had to wait in their car) and informed that everything went to plan, however, Indy’s ear feathering was going to be problematic. To make sure his fur stayed out of his eye, they used rubber bands to tie them up into a little bun. 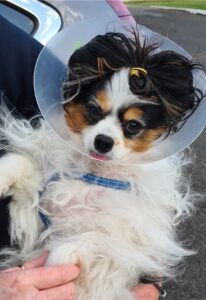 Amber could not stop staring at her brother’s new hairdo! He looked weird. I must admit it was hard to contain the giggles. 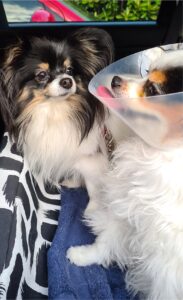 As soon as we got home Indy shook his head and out came the bun. I searched high and low around the house for something else to tie them back with. All I had were pink ribbons! I figured, he won’t know their pink. Guess he did, he shook them off almost immediately. 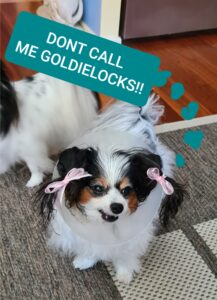 Two weeks later Indy had his check up and Dr Hampson announced his ulcer was totally healed.

Indy was very depressed throughout all of this, and I will admit his treatment plan was a real struggle. Trying to get all the ointments and drops in throughout the day at the required times, the E-collar created terrible matting around his neck, Indy ended up with a shocking hot spot which needed to be treated with an antiseptic wash. 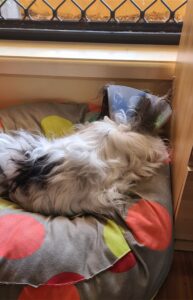 Will the Indolent Eye Ulcer recur? I was told, unfortunately, yes it could. Sometimes the recurrence can reoccur in either eye later. I held off on this post for quite a few months, I was so worried about it coming back. But, so far so good. I do not want Indy to go through that again! 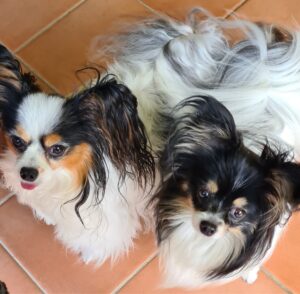