Corey loved the wind in his face.  He enjoyed going for a drive in the car because he could sit on your lap, put his head out the window and feel the wind in his fur.  He also loved the bike basket, leaning forward as far as he could just to take it all in! 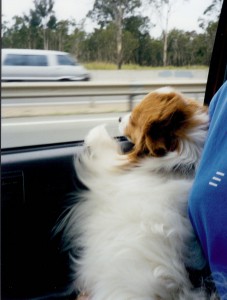 Amber too loves nothing more than going for a drive in the car!  She does prefer her little green car seat to a lap and is more than happy to run a few errands around town or a long drive to the beach.  She curls up in her car seat for a snooze, on occasion sitting up and glancing out the window to get her bearings before curling back up into a ball again. 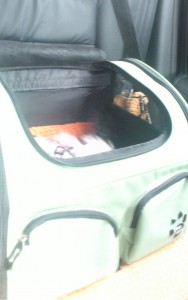 Amber Asleep In Her Car Seat

Since the car seat has been such a hit with Amber, she loves her little safe spot; I ordered Indy his very own.  While waiting for the car seat to arrive in the post, I used his soft crate to get him familiar with traveling in the car.

The first few drives did not go as well as I had planned or expected.  Indy scratched around the crate, circling, whimpering before finally depositing his entire breakfast on his blanket.

I was not so sure how to manage a dog that gets car sick, since both Corey and Amber loved the car.  After a little bit of time spent on “Dr Google” I read up on many different theories and potions.  I also recalled a natural flower essence remedy that I tried on Corey during times of stress (a result of old age dementia).  It certainly appeared helpful in those early stages.  I wondered if this might help Indy.

A few days later the car seat arrives and Indy seemed quite happy and content sitting in the open top and Amber by his side.  I considered a very short drive would be best for his first time in his new car seat.  I settled on a walk along the Brisbane river as a nice destination with plenty of walking and bike tracks, and it is only about 5 minutes driving from my house. 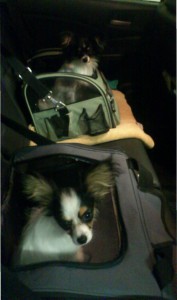 Taking the bends nice and slow Indy gave a couple of wretches of motion sickness before glancing nervously over at Amber, who by this time was already curled up in a ball.  I also could make out a nervous new look ‘drooly rabid mouth’.

Just in time we arrive at our destination and both Amber and Indy are sitting up, excited and keen as mustard for a walk.  After finishing the full walk, made friends with a few local dogs Amber and Indy were content to be bundled back into their car seats for the short trip home.

I arrive home to discover Indy had silently deposited his entire breakfast all over his brand new car seat.

Hmmmm now where was it I got that bottle of flower essence again?