I Found A Paralysis Tick On My Dog!

Living in Australia and in particular the eastern coast, there are three things that truly scare pet parents – snakes, toads and paralysis ticks.

To a greater degree we do have some control over our pets coming into contact with snakes and toads; you can train them at an early age to steer clear, put them on a lead when out for a stroll or going to the toilet and by removing leaf litter and overgrown areas in your garden that snakes and toads like to take shelter.

However, it is not that simple when it comes to paralysis ticks!  Many people believe they are only found in grassy bushland, but paralysis ticks can be found everywhere day or night, even in your own backyard! As they are carried in by their native hosts such as bandicoots, possums and kangaroos, they can even hitch a ride on a windy day.

The very mention that paralysis tick season has commenced gives me the chills.  It officially runs from September through to March, although in warmer climates such as Queensland we start to see paralysis tick activity earlier in August.

I have always tried to be a vigilant fur-mum when it comes to paralysis tick season; I never walk my dogs in bushland and a daily physical check plays a very important role in finding these nasty critters early.

Since many dogs are super fluffy this process can be quite time consuming.  I know I could have them clipped to make this duty easier; but I just cannot bring myself to clip their lovely Pappy coats. 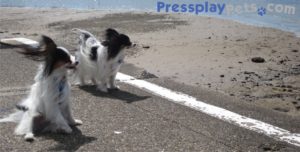 I Can Not Bear To Clip Their Beautiful Coat

One morning I was giving my dogs Amber and Indy a cuddle when I felt something odd on Amber’s back.  At first I thought it was just a bit of skin or a tiny dried scab. I parted her coat and what I discovered was something the size of a sesame seed and pale in colour. Using my finger nail I pushed around a little and this odd looking sesame seed appeared to be attached; as if it had always been on her body.

I keep staring at it and the more I did, the more I started to suspect that it might actually be a paralysis tick. But I thought it was way too small. It did not look like what I remember seeing in the brochures and posters at the vet clinic. I poked around a little more and suddenly was able to make out what appears like little legs.  I freaked out!  With some tweezers I grabbed hold and pulled.  It would not budge.  I tried again, this time as Amber let out a little yelp it finally pulled free!

Placing it in a zip lock bag I jumped into the car with Amber in tow and raced to the vet.  Under a microscope it was confirmed; a female paralysis tick.  I was surprised it was so small!  The vet was even more surprised I actually discovered it.  The tick was not “engorged” (ticks release paralysing toxins into the blood stream of the animal they attach to, increasing in size as they become engorged with their blood) this meant it had not been on Amber for any length of time; likely just the day prior.

After a thorough examination and satisfied there were no more paralysis ticks, Amber was given an oral preventative to kill any that might be hiding – just because I found one does not mean it’s the ONLY one!  I was instructed to keep a close eye on her for the next 48 hours and look for any delayed symptoms of being bitten by a paralysis tick, such as difficulty swallowing, hoarse bark and lameness.

Thankfully, Amber never did show any signs of tick paralysis and even to this day I consider myself one very lucky fur-mum.  I know how devastating the outcome could have been. 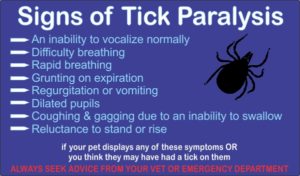 “This sponsored post was brought to you by Bravecto
If you think your pet may be showing signs of tick paralysis, always seek advice from your vet”.

Author Bio:  Nikki is pack leader at Pressplay Pets, a blog for the modern age pet parent interested in health & care, news, reviews & personal accounts of unconditional love & at times heartfelt pain of pet parenting.  She is also proud mum to cute and cheeky Papillons ‘Amber’ and ‘Indy’ and one crazy Rainbow Lorikeet named ‘Ralph’!  Follow my Facebook and Twitter.