Amber has a Kelpie friend named Bundy. He is a stunning looking red dog that would never have made it in the herding world. Sure in typical working breed nature he is high energy and loves to chase anything and everything. But as far as being a successful working dog, he is far too submissive and gentle. He does not have a dominant or assertive bone in his body. Everything to Bundy spells ‘Playtime’!

Bundy is now almost two and it was time to find him a fur-sibling.  Bundy’s mum had never owned a small dog before, having spent her childhood surrounded by a St Bernard, Doberman and Wolfhound.  So it came as quite a surprise that the only request was the dog should ideally be smaller than Bundy; and a rescue! 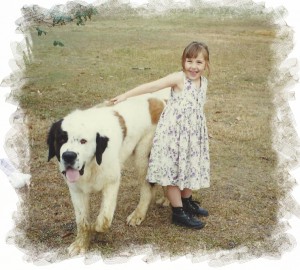 As A Child With The Family Dog

I was presented with my latest mission!

After searching through hundreds of smaller dogs on Pet Rescue, I stumbled upon the sweetest little face advertised as ‘Free Too Good Home’ through an online site.   Not many people are aware of the amount of unscrupulous people trawling through online sites & newspaper classifieds in search of ‘Free To Good Home’ advertisements so that they can pose as “caring” persons or families offering a wonderful home for your pet.  While in reality they are planning to use your pet for their own cruel financial or entertainments benefit.  I immediately called the number listed. 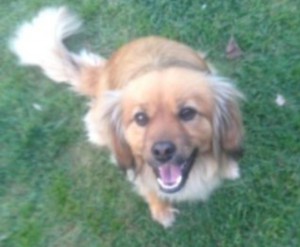 Who Could Resist This Face?

I was told little ‘Molly’s’ story. Her mum had become very unwell and with no-one available to look after her, Molly’s imminent fate was to be euthanized.  Her caring neighbour could not bear the thought and offered to look after Molly until her mum was better.  They did have some work on their hands though as Molly was very timid, overweight and had a terribly matted coat.  After professional grooming, change in diet and working on her confidence, a healthy and wonderfully sweet dog emerged.

I was relieved to learn that her foster mum was extremely picky and very careful about whom she was to be re-homed, having already interviewed a number of unsuitable candidates.  We had a long discussion about Molly’s prospective new family and after speaking to Bundy’s mum, a meet and greet was arranged! 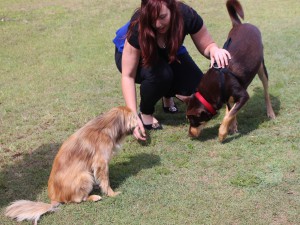 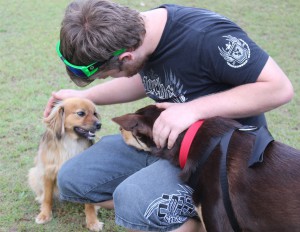 To everyone’s surprise Molly decided almost immediately to stand her ground.  She wanted to be sure that Bundy understood this was her yard and that he best be a gentleman and ‘back off’ a little.  Bundy of course, not familiar with such strong words, immediately assumed the position with tail between his legs. Figuring a less direct approach might be best he casually sniffed around the yard while marking a few trees here and there. 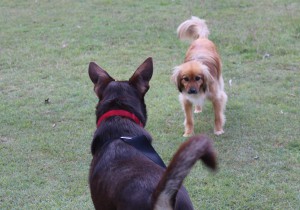 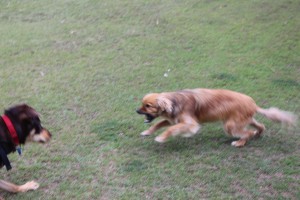 Molly Tells Bundy To Back Off!

A short time later everything settled down and positive reinforcement pats were given all round.  Molly very quickly determined that Bundy was nothing to be scared of and a peaceful co-existence started to form.  It was clear to everyone that Molly and Bundy were very similar in personality, both so very gentle in nature and it did appear they would be great company for each other. 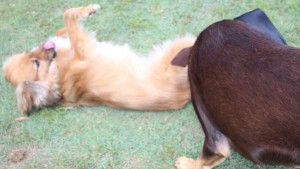 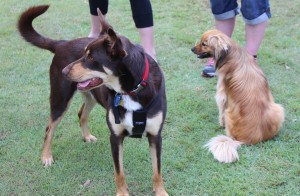 Good Golly, Miss Molly it seems you have found your new fur-ever home with a red dog named Bundy!