What Beautiful Claws You Have

I was sitting in the lounge room dreading my next move.   The time had come, actually it was months overdue and I felt sick to my stomach.  Hands trembling I looked down at the small red handled instrument I was holding and thought to myself ‘how could this little thing cause so much anxiety’? 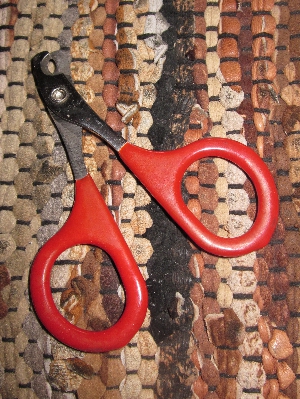 I was about to attempt something I had never done before – it was time to trim Ralph’s claws. I frankly had no idea how I was going to do it.

My mind kept flashing back to the first (and last) time I trimmed his flight feathers.  Under advice from the local ‘bird man’ I wrapped him up in a thick fluffy tea towel and carefully stretched the first wing out to full length.  He seemed quite relaxed about all of the attention and petting.

Slow and steady, careful to make sure it was nice and straight, I commenced to trim the feathers.  He immediately realised he had been tricked and bit down hard into the tea towel.  I may as well have wrapped him up in a tissue since his beak went right through the towel and directly into my knuckle.  Everything changed from slow and steady nice straight lines to undertaking the task like I was cutting back an overgrown hedge with an electric trimmer.

I have always had a fear of claw trimmers.  This stems back to the time I accidently cut one of Corey’s claws a little too short and it bled.  Oh boy it bled.  It was at that moment I decided claw trimming was best left to the professionals.

Then I had an idea!  What if I could get Ralph to jump onto the front of his house?  His claws would be exposed and if I could just hold his attention with something I could very well sneakily trim just the tip of each claw!  This may actually work!

I tried to appear calm, like nothing was wrong.  I casually approached his house, trying to hide the red handled tool in one hand and holding a brightly coloured green and black plastic bottle in the other.  I was hoping the bright green lid would spark his ever inquisitive attention.

I was greeted with his usually excitable ‘Hello, Hello’ and like clockwork; he spotted the bottle and jump straight onto the the front of his house – claws exposed.  I got up nice and close showing him the lid.  Ralph just LOVES anything that’s brightly coloured.  He LOVED the lid; head bobbing, fluffing up his feathers, tapping his beak on the lid and making little trilling sounds.

With shaking hands I started to trim each claw.  It was slow and tedious.  If only he didn’t jump around so much.  Ralph is now proudly sporting a set of manicured claws to which he is still trying to get accustomed. 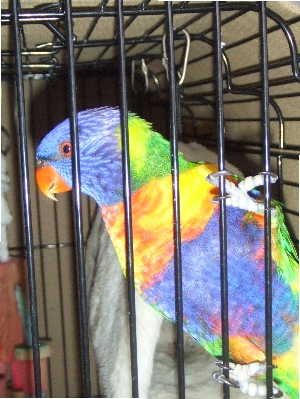 I wonder if he will fall for it next-time?