When Amber arrived I was a little worried if Ralph would get his beak all out of place.  I had hoped that since he had lived with Corey and Morticha he would understand and totally accept this new fluffy thing taking a portion of the attention away from him.  He was going to have to share again.

When Amber and Ralph first met Amber was trotting around the backyard oblivious to Ralph.  How she missed the screeching calls he was sending out I will never know, maybe she was just so interested in her new home.  Ralph however had spotted her immediately and was warning me of the intruder at hand! 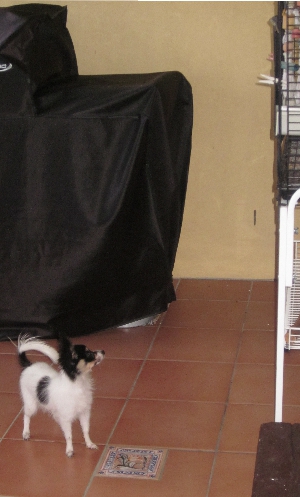 I picked Amber up and put her up close to the cage, I carefully watched Ralph’s body language; looking for flattening feathers, diluted pupils or arched neck, signs that he is not impressed and attack was at hand.  I was surprised and relieved there was none of that.  Ralph was head bobbing and saying ‘Hello’ over and over again.  Amber stared eyes wide.

Things had been going well for the first month and then I started noticing that Ralph was acting weird….er.  He was making lots of strange clicking and squeaking sounds.  He has started ripping shreds from his toys and worst of all – Biting!   Even the lawn mower man (who Ralph likes) said Ralph has started racing toward him and attempting to bite,

I was starting to get concerned that Ralph was showing major signs of stress and jealousy. What should I do?  This extra unusual behaviour continued for a couple of more weeks.  Then to my surprise one morning it just stopped.  I opened up Ralph’s cover of his cage and spotted something on the bottom….an egg!   Ralph’s a girl! 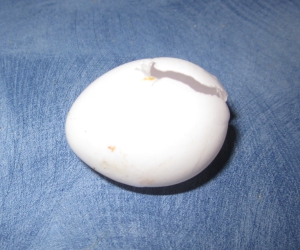 Over the next few days Ralph went back to normal.  He….or rather she was not jealous at all.  Amber was the least of her worries; she just had some personal dramas of her own to take care of!  If that egg was fertilized, she would have been a single mum!

Now what to do with her name?