Butter Wouldn't Melt In Their Mouths!

When Corey, aka “Angel Boy” was a puppy the only thing he ‘chewed up’ in the house was the corner of a ‘Belle’ magazine (he did have good taste, no TV week for my boy).  True story, hand on heart and no fibbing.   He was an angel. 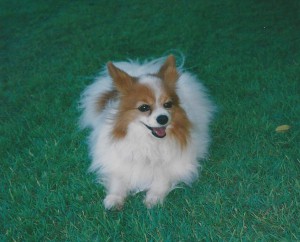 So you would suppose with him not being much of a chewer I had trouble giving him bones?  Well, in the contrary; he LOVED raw chicken wings and brisket bones.  I started him on them at around 10 weeks of age and he ate 2 raw bones a week for his entire life. 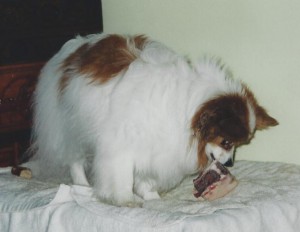 When Amber, aka “Miss Princess” came along, I was quick to start her on chicken wings.  She too LOVES them.   Even though I started her on raw bones early she did manage to put a few chew marks on a handful of little things around the house.  Let’s just say I do not have a single pair of sneakers still with the little plastic tip on the shoelaces, they are all gone never to be seen again.  Thankfully Amber has out grown the “chewing phase”, only relapsing on the odd occasion when being extra cheeky with Indy. 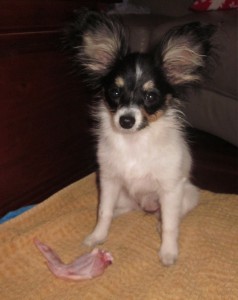 Now that leads me to Indy, aka “Mr Handsome”.    As history repeats I started Indy on raw chicken wings the week after he came home.  He did not have many teeth to chew with, but it did give him “the taste’.  He also LOVES chicken wings.  Heaven forbid he perceives someone is going to steal it from him; he can and will run like the wind (always with chicken wing wedge firmly in his mouth)! 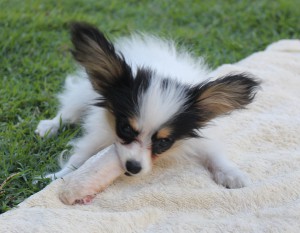 Indy is a bit of a cheeky boy and has already out done Corey and Amber when it comes to chewing things up in the house. 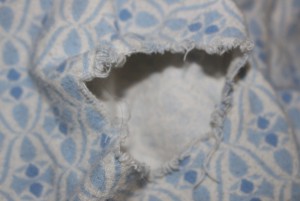 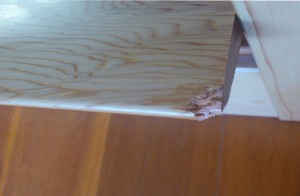 With fists & paws pounding the air and performing the happy dance in unison, I can announce that Indy’s very last puppy tooth came out over the weekend!  While it is sad that my handsome little boy is growing up, both Amber and I will NOT miss those razor wire puppy teeth AND hope now his desire to chew everything in site will move towards only chewing on lots of raw chicken wings, treats and chew toys! 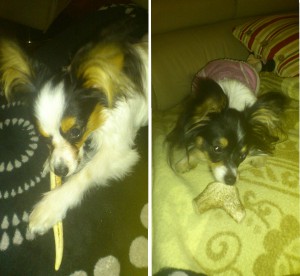