The Ladies Have Arrived!

We would like to introduce you to our new feathered residents:

The ladies arrived with their very own bespoke mobile “palace” and are slowly settling into their new environment.

Let me tell you a little about these ladies!

Sisters from the same dad, Rhode Island Red and mum, Light Sussex.  Although almost identical in appearance have their very own personality and differences to tell them all apart from each other. 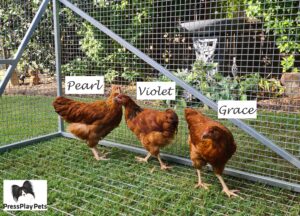 Personality: The largest of the ladies and certainly the most confident. She has quickly positioned herself at the top of the pecking order.  Always making sure to get the best nesting box she is the first to bed at night.  Not before swanning around her “palace” making “buck buck” calls to announce she is off to bed.

Appearance: Unlike her big sister Pearl her feathers are a deep red colour and have a small amount of black neck and tail feathering.

Personality:  She started off as the shy girl, but now has positioned herself as 2IC and has the odd stand off with Pearl just to make sure everyone knows where she stands.  Stays close to her sister Violets’ side.

Appearance:  Just like her sister Grace, has deep red coloured feathers, however, easily identified with a lot more black neck and tail feathering

Personality: She is the most nervous of the three and the first to bolt when one of her sisters gets a fright.  Stands behind her sisters when approached 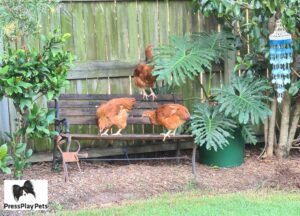 The Ladies Are Finding Their Favourite Hang Outs

And a little about their designer pad:

Living in suburbia and working during the day I needed a coop that I could move around the yard so that the ladies could be safe to scratch around in a fresh location each day while I was working and able to be allowed out to free range, when I got home in the afternoon. I also wanted a mobile coop because this meant for me less time spent mucking out a whole coop and run! The ladies poop on the grass and we give it a rake up every arvo.

I looked around and there are a number of mobile coops on the market, ranging from cheap as chips timber to the upper end of the market, steel frame with colorbond. All are perfectly capable of doing the job, it’s just that they kind of stick out like “you know what”.

I was hoping to find something with a little more style, a unique look that also had all the functionality and safety of my hens in mind. But I was not sure what was essential or what was a waste of money in a perfect coop? When I discussed the idea of getting hens with a family member (yes the same one that gave me my three hens) I showed him the coop options on the market he said he liked them but thought he could custom make one that would be just what I was looking for.

And wow did he deliver!  We all LOVE the coop and all the little details that match our very own house AND it looks awesome in the backyard! 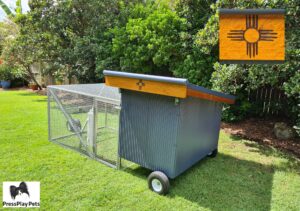 PS:  When the hens were first delivered we received a different Violet.  Which after 2 weeks revealed herself as Victor!  Since our council does not permit roosters, Victor was promptly returned to his old home and along came our new Violet.  The message here is, if you are not permitted to have roosters where you live than make sure if you are getting “hens” from someone who offers a return or swap policy if one ends up being a cock-a-doodle-doo! 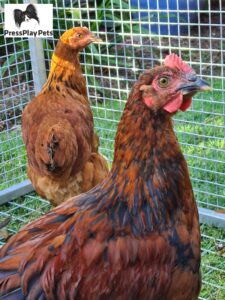