Amber and Indy had a doggie play date on the weekend!

First to arrive was Lili.  Amber and Indy were so excited to have someone new to play with!

Lili on the other hand, being an only fur-child immediately established that these two crazy eye Papillons squealing at her from all sides were scary, really scary!  She assumed the position, tail between legs, ears back and a pearly ‘smile’ on her dial.

After some gentle encouragement to try and get Amber and Indy to be a little less excitable with Lili.  They took a much more calmer approach with their new doggie friend.  We very quickly surmised Lili needed a lot more socialisation time penciled into her dance card! 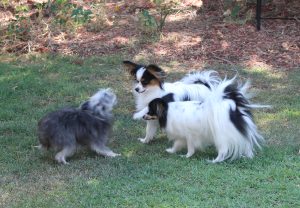 Just as Lili was starting to settle down our second doggie guest had arrived, Jack!  He is just as you would expect of your typical pocket rocket Mini Foxy pup, full of beans and bursting with 100% confidence.  He bounded into the ring like “The Rock ‘n’ Roll Express”. 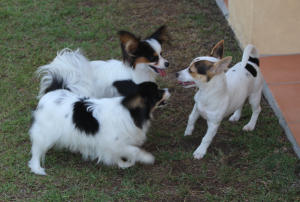 Little Lili watched these three crazy dogs running this way and that.  She did not know what to do but run up into the arms of her dad to watch from a safe distance. 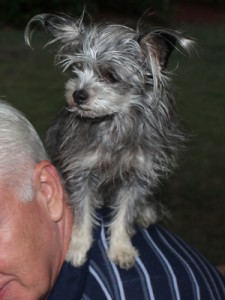 I’m In My Safe Spot

Amber being the most grown up in the pack determined some rules needed to be established; to settle the boys down when they were getting a little out of hand she would give a growl and stern glare to put them back in place, at least for a few minutes.  After some time Amber also decided that Indy and Jack play a little too rough for her liking, she turned her attention to Lili. 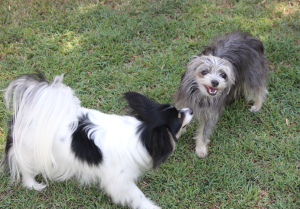 Lili was quietly moving around the yard keeping a very close eye on the two rough boys playing, they were not her cup of tea at all.  Amber always favouring more gentle play did her best to encourage Lili to play with her. A little play bow here and there, some tail wags, muzzle licking and finally she started to come around. 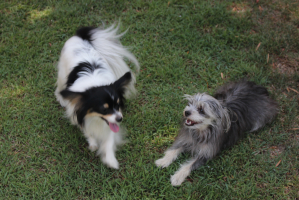 Amber Takes Lili Under Her Wing

Suddenly the two rambunctious boys gate crash the girl’s newly established party!  Lili was horrified, whilst Amber immediately put on her bossy girl britches, having a chat to them about their little performance.  Boys! 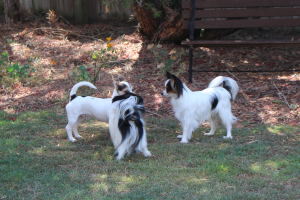 Now Listen Here Boys…
This Rough Housing Has Got To Stop! 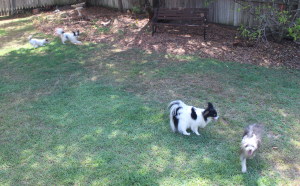 The Girls V’s The Boys

After the initial kerfuffle the girls quietly meandered around the yard together, sniffing this and that.  Calmly just in each others company.  The boys quickly lost interest in them and raced off together for some more rough and tumble. 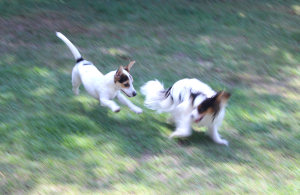 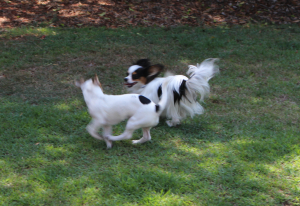 Four hours later it was time for everyone to go home, with Lili and Jack bundled back into their cars for the trip home. We made a promise to arrange another play date soon!