Service Dogs In The Spotlight

Imagine the following scenario. En route to the funeral of a departed friend, you stop by a local bar to grab a sandwich and a drink. You are legally blind and susceptible to occasional seizures, resulting from a cerebral hemorrhage that you suffered many years ago.  Rounding out the picture is the service dog at your side in the golf cart you are driving, your companion who tags along with you, wherever you go. Unremarkable, right?  Not exactly. You enter the bar, and you are promptly asked by the proprietor to remove the service dog from the premises, as the establishment’s policy prohibits pets from entering. You proceed to protest, gesturing towards the service dog jacket fastened to the dog, all the while proclaiming your right to bring the dog in, as mandated by the American Disabilities Act (ADA.) You contend that as a disabled person, you need the dog to accompany you wherever you go.

Let’s give this story some live characters and follow how it unfolded, enabling our audience to review the facts and weigh in on this key topic. As reported by Virginia Black of the South Bend Tribune, Garnett Porter entered the Time Out Bar in Walkerton, Indiana on March 10, 2015, together with her dog Bo. Bar owner Scott Rajski, in accordance with store rules, informed her that the dog had to leave.  She refused to comply, and eventually was escorted out the door by two police officers from the Starke County Sheriff’s Department, despite her pleas that she needed her service dog to cope with her disability. Ultimately, after researching the provisions of the ADA law, Rajski acknowledged that Porter had been in her right to demand access for Bo to his bar, but he was extremely disturbed at what he described as an ambiguous law.

Federal Civil Rights laws provide for a person to use a service dog for a wide range of disabilities, including but not limited to mental conditions. Under the law, a service dog must be allowed to enter any business that is open to the public. However, the business owner is not permitted to inquire as to what the exact disability is, nor is the person required to produce documentation supporting his claim of disability. According to Kent Hull, who sits on the Indiana Civil Rights Commission, a service animal is defined as an animal that “provides comfort” and the service animal owner has the sole authority to determine the comfort level that is necessary.

We will not delve into the conversation between Mr. Rajski and Mrs. Porter, as it is safe to assume that they didn’t exchange pleasantries. However, after analyzing the ADA law, it appears that Mrs. Porter was entitled to bring Bo into the bar. She maintained that she’s disabled, and as per HER interpretation, her comfort level was enhanced by the companionship of her dog. The law supports her request, and as mentioned earlier, Mr. Rajski eventually agreed that she was protected by the law. No controversy here, as the law is the law.

Mr. Rajski’s bone of contention though (pun most definitely intended!), is that in his opinion, Mrs. Porter’s condition doesn’t warrant the services of a service dog. Proof in the pudding, he claimed, lays in the fact that Mrs. Porter is capable of driving a golf cart. Her vision, he feels, has not been dramatically impaired. Craving companionship, he asserts, is not grounds for a service dog and all of the associated rights granted by the ADA law. Mrs. Porter contends however, that Bo is more than just a companion.  Their relationship has evolved to the point, that he has developed a sixth sense enabling him to predict her oncoming seizures, alerting her in advance with excessive barking. This has afforded her the opportunity to be prepared for her ensuing unconsciousness.  Essentially, their disagreement revolves around the interpretation of what “service” does a service dog provide. Although in the long run Mr. Rajski conceded that the law was in Mrs. Porter’s favor, perhaps we can raise a few points, fodder for discussion.

How would you describe the “service” provided by a service dog? Do you feel that each person’s disability is personal and therefore can only be assessed by the individual himself as the law prescribes? Or is the law too vague, and without more direction as to what is considered true service, are the rights of store owners being infringed upon by intruding pets? Case in point would be the woman who boarded a Washington bound US Airways flight from Connecticut before Thanksgiving with an 80 pound pig. Passengers were alarmed at the sight of the hog, which was described by its owner as an “emotional support” companion. After being “disruptive”, including howling and defecating in the aisle, airline officials escorted owner and pig off the aircraft. (Kind of adds new meaning to the adage, “when pigs fly!”)  Where do you draw the line with the ever-expanding definition of “comforting” and “emotional support”?

As this is our blog’s initial foray into Australia, I must admit that I’m not at all familiar with Australian law, as it relates to service animals. I’d love to hear feedback from the audience on this topic from an Australian vantage point, and from an overall perspective as well. What do you think about the American laws governing this matter?

I welcome your valuable thoughts and contributions. 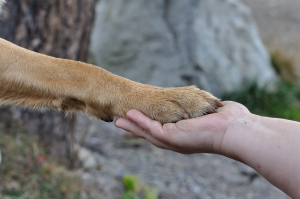 Author Bio:  Abe Lerner is a member of the pack at NutralifePet, a division of Nutralife Health Products, Inc., which has been selling high quality dietary supplements since 1996. NutralifePet, the manufacturer of Ultra Joint & Liver Support with SAM-e for dogs and cats, caters to the individual needs of each pet. NutralifePet…caring about animals, one pet at a time…