My Dog Dislocated His Hip!

It has been quite a few months since I have posted anything about Amber and Indy’s adventures!

There has been a very good reason for this; my little boy Indy decided to have a misadventure of his own and as a result has been on very strict rest.

Indy’s misadventure occurred one afternoon just as I arrived home.  Amber and Indy were fast asleep inside the house when they heard my arrival; as usual and as they do every time I come home they run, jump and spin around with excitement.  Although this time Indy slipped over and immediately starting yelping, or rather screaming in pain.  Within seconds his tongue went blue and then white; he appeared to be going into shock as we raced to the Animal Emergency Service.  Every bump in the road would make Indy scream even more.  It is a sound I have never heard from any of my pets before and I never want to hear it again.

On arrival we were quickly ushered to waiting vet Dr Kayla; who immediately offered Indy pain relief as she took him from my arms.

In the waiting room we sat for only minutes, which felt like an hour as Dr Kayla emerged to confirm our suspicion; Indy had dislocated his hip.  It was now “popped” back into place; however he had to have radiographs under anaesthetic to ensure it was correctly in place.  As many of you may remember; Indy was diagnosed with Meningitis in 2015; any treatment under anaesthetic is always a concern. I felt sick. 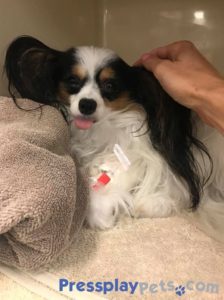 It Is The Little Things That Mean The Most During A Difficult Time. THANK YOU Dr Alex Hynes For Giving Indy A Cuddle When He Needed It Most AND For Sending Me This Photo When I Needed It Most!

Dr Kayla explained the types of dislocations it could be and the treatment available.

Craniodorsal Luxation where the hip dislocates in an upward direction. This accounts for 95% of all hip dislocation.

Caudoventral Luxation where the hip dislocates under the pelvis. This type of dislocation occurs as a result of the dog going the “splits” with the hind limb and is less common.

The radiographs concluded that Indy had “Caudoventral Luxation of Coxofemoral Joint”. When he slipped over in the house he did the “splits”; which caused his hip to dislocate.

Closed Reduction is when the limb is kept in place by a bandage; this allows the joint time to heal and re-stabilize without the risk of it reluxating.  A sling in used in the case of  Craniodorsal Luxation OR Hobbles in Indy’s case where a Caudoventral Luxation has occurred.  The hobbles keep the back legs together so it cannot “pop” out and to allow time to heal.

Surgical correction involves securing the joint with artificial ligaments. In severe cases, the patient may have to undergo either a total hip replacement or a femoral head and neck osteotomy.

It was explained to me that most vets will almost always recommend closed reduction due to being non-invasive.  However, it only has a 50% success rate depending on the amount of damage, especially to the ligaments, tendons, and joint capsule that has occurred.  But it is worth trying to prevent surgery.

Indy was put under anaesthetic and his “Hobbles” were put in place. 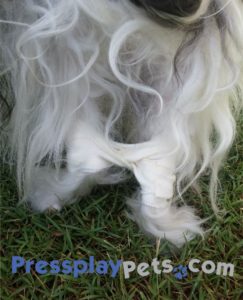 “Hobbles” On Indy’s Back Legs

Indy’s Treatment Plan:
– In 48 hours the hobbles to be checked by our regular vet for swelling or discomfort
– Hobbles to remain in place for 6-8 weeks
– 100% crate rest. No walks or jumping during this time
– Toilet breaks on lead at all times
– He will be unable to abduct (lift his leg) to urinate; monitor for appropriate urination
– Tramadol for pain relief 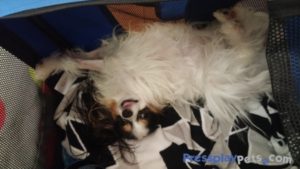 Indy Making Up New Ways To Spend His Crate Time

Indy hated the hobbles and refused to urinate. No matter how many times he was taken out for toilet break he would just stand in the one spot and when he did try to walk it was only for a couple of steps before he would sit down.  It was heartbreaking to watch.

Unfortunately, Indy’s refusal to go to the toilet meant that his regular vets; Dr Katrina and Dr Lucilla at Monier Vet had to catheterise him every morning and afternoon.  There is a risk of infection and trauma when doing this so often, which meant after 5 days and Indy was still not urinating on his own; it looked like the hobbles would have to come off early.  We were all disappointed; this would make a huge difference to a successful recovery. 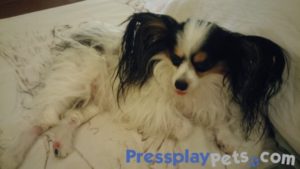 Everyday we would encourage Indy to try walking with the hobbles on.  Then late in the afternoon on the 5th day, Indy just decided to start “hobbling” around the yard and finally went to the toilet all by himself. The hobbles could stay on!

After a couple of days of strict crate rest; both Indy and Amber were becoming quite frustrated at home with no walkies. I considered getting a pram so that Indy could get out into the fresh air and Amber could get her daily walks.  I advertised online and the very next day a kind stranger offered me her old pram which she used for her dog after patella surgery. 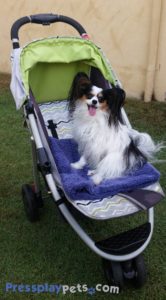 1st Time In His Pram!

Indy LOVED the pram and sat in it like his royal highness! He got so much attention on our walks that I ended up making a little sign so people would give him space to recover (and to stop the “spoilt dog” comments!). 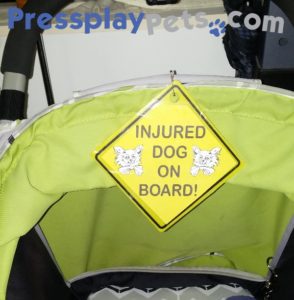 Injured Dog On Board – Please Respect His Recovery Time

8 weeks later; the time arrived for the “Hobbles” to be removed (and finally his coat could have a proper brush – Indy was starting to resemble a Puli dog!).  I was sick with worry; worried that his hip would luxate again and worried that he had to once again go under anaesthetic.  I picked Indy up that afternoon and was relieved to hear and see that everything went to plan.  Indy was able to walk around the house (which now has rubber-back matts everywhere) that very afternoon.

For the next 3 months he continued to have daily pram rides with short slow and gentle intermitted walks to build up his muscle. 5 months on and Indy is going for daily walks and running around with no issues. I must admit I keep a very close eye on play time and have implemented calm behaviour when inside the house; fingers crossed Indy never has to go through that again. 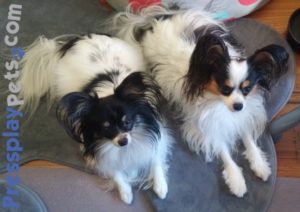 Amber and Indy – Happy Everything Is Back To Normal Again!