As a young child my family lived in a little yellow fibro house on the main road into town.  I have such fond memories of that house and remember the backyard so vividly like it was yesterday.  Above ground pool, big gumtrees, swing set and long driveway that lead to a two car green corrugated iron garage. My sisters and I spent every minute we could in that backyard, swimming in the pool, playing with our ever increasing number of guinea pigs and our beautiful little dog ‘Cindy’.  We lived a typical Aussie life.  Mum was a Teacher’s Aide at the local public school and Dad a skilled Crane Driver.  Dad was and still is pretty handy when it comes to DIY.  He taught himself many things from installing the pool, tiling and building fences.

Our backyard had a low 4 foot fence which Dad had removed and was in the middle of building new a 6 foot one.   Timber down one side that ran along a vacant block of land and across the back and wire fencing on the other side that ran along our neighbour’s property (chat friendly fencing so to speak).

For Cindy’s safety while the new fence was installed she was tied on a long rope to the clothes line during the day and in the laundry at night.  One day just before the fence was nearly complete I was bored and wandering around the backyard I walked over to the above ground pool, which was about my height at the time and as I slide my hand into the cool water my hand bumped something.  Peering over the edge I saw something black and hairy in the water.  I had no idea what it was and started screaming in sheer terror! 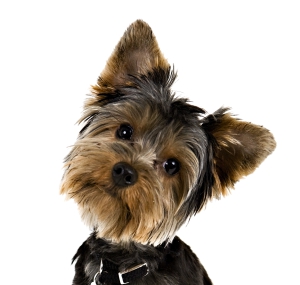 Cindy Looked Similar To This
(not my photo)

Dad came tearing out of the house straight to the pool, reaching in the water he pulled out the lifeless little body of beautiful Cindy.  The pool was far too high for her to jump into and the pool ladder to awkward to climb.  I have always believed that someone walking past must have noticed Cindy and thrown her into our pool to drown.  I guess we will never really know what happened to her.   We were all so upset, crying and confused.  For us three young girls it was very confusing to process this in our young minds.  Why and more so how this happened?  We buried our little Cindy in the backyard wrapped in my big sister’s baby blanket.  What happened to her often creeps back into my thoughts.  We stopped swimming in that pool and Dad eventually tore it down.

My parents desperate to try stop the hysterical crying and heartbreak of their three daughters started searching the Trading Post.  That is when they came across a family looking to find a new home for their dog, an Australian Silky Terrier just like Cindy!  We went to the house and met Penny.  She was bigger than Cindy and did come with a few issues.  The family owned two other large dogs that apparently always stole Penny’s dinner.  As a result she learned to fight to keep her food and had become very food possessive.  Biting if approached while eating.  My parents were reluctant to bring Penny home having three young daughters they were worried.  We of course would have none of that.  Penny was coming home with us and that was that! 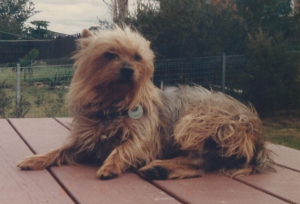 Penny as it turned out, was an awesome dog.  Yes, I think all of us did get bitten at least once during her life with us.  However, as far as I am concerned that really was her only vice.  She would allow me to do just about anything to her from dress ups, painting her claws bright red and even giving her bubble baths!  She was perfect. 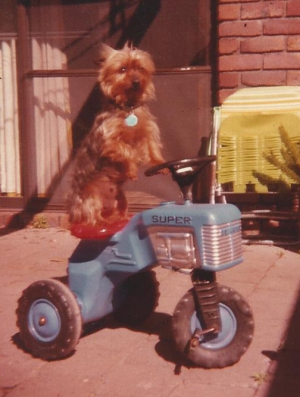 Penny On A Trike! 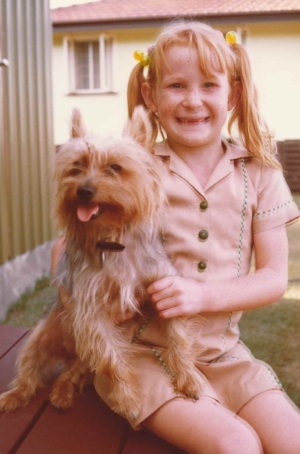 Giving Penny A Cuddle Before School 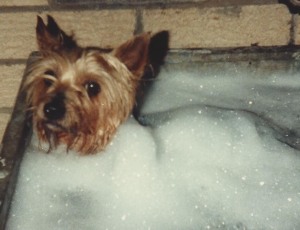 Penny Having A Bubble Bath!

Many years later, my eldest sister now working after school at Target decided to bring home another dog as a friend for Penny.  The story she told was that her manager at Target knew an elderly lady that could no longer take care of her dog and was now moving into a nursing home.  The manager had one condition ‘If you take her, you can not bring her back’  My sister was kind enough to offer her help!

Standing in the hallway my sister is clutching tightly to a tiny little dog full of fleas and an oily matted coat.  Jessica was also an Australian Silky Terrier.  I  could hear Dad telling my her ‘We are not keeping the dog’ ‘Bring her back tomorrow’ ‘You need to find her another home’ ‘We are not having two dogs’.  My sister was crying.  I am not sure what actually happened but the next thing I know is the neighbour offered to adopt her. 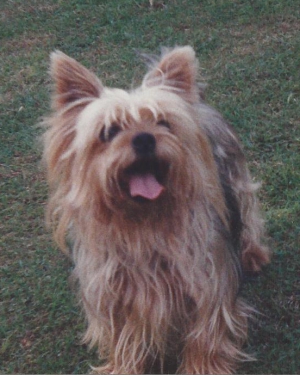 Jessica may have been formally adopted by the family next door, but she never stayed there, only going home to eat.  She was always at our place.  Everywhere I went, there was Jessica.  Protecting me from anything and anyone.  She was my shadow, my confidant and I loved her for it.  Then one day, she was gone.   We were told Jessica had been rushed to the vet.  She had contracted to potentially life threatening ‘Parvovirus’.  Having never owned a dog before our neighbour claimed they had no idea she had to be vaccinated.  Jessica was going to be put to sleep. 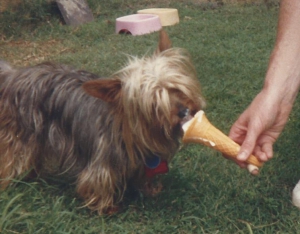 I remember crying so much they decided to continue with her treatment.  After nearly two weeks Jessica made a surprising recovery!  Then to top it off, our neighbour decided to move house and advised they could not take Jessica with them.  After much begging, pleading and crying, Dad finally caved and Jessica moved in with us permanently.  She was destined to be part of our family all along.

Penny and Jessica lived out the rest of their lives as much loved family members. 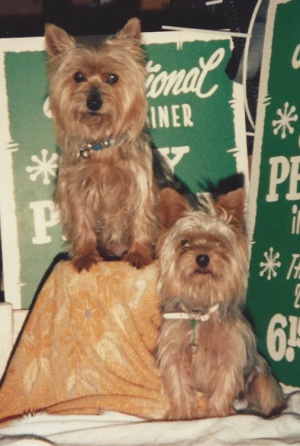